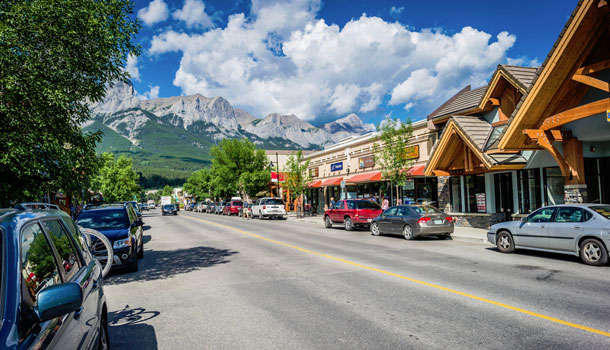 It may be hard to believe today, but Canmore, Canada, began life in the late 1800s as a small coal-mining town. Actually many small towns sprung up around this time, as railways grew and began to traverse the Canadian Rockies, connecting Eastern Canada with its Western counterpart. While many coal towns have come and gone, Canmore continues to thrive – on tourism. After the 1998 Calgary Winter Olympics, the secret was out; Canmore’s population grew from around 3,000 people to more than 12,000 today.

Like any city or town located in the Canadian Rockies, Canmore is surrounded by unspoiled natural beauty. In fact some of the best hiking in the region can be found just outside of your Canmore hotel or accommodations. Dramatic mountain vistas, pristine rivers, streams, waterfalls and lakes, and abundant wildlife – everything you need for a vacation getaway or holiday in the Rockies. And after your hike there are plenty of pubs and restaurants for you to choose from in downtown Canmore where you can relax and refuel.

Canmore is just 25 kilometers southeast of Banff down the Trans Canada Highway where the town straddles the Bow River. At its highest point the town’s elevation is 1,480 meters, or about 14,856 feet. While Canmore resides in the Bow River valley, it is of course surrounded by peaks, such as The Three Sisters, Mount Lady MacDonald, Mount Lawrence Grassi and Grotto Mountain.

Wondering about the name? The town of Canmore wears its Scottish heritage on its sleeve; the name is taken from Malcolm of Canmore, a Scottish king from 1057 to 1093. The name translates literally as “big head.”